We work with our local communities to support many local initiatives, from supporting educational sustainability initiatives in schools to safely disposing of medication to preventing mercury from entering the waste stream. 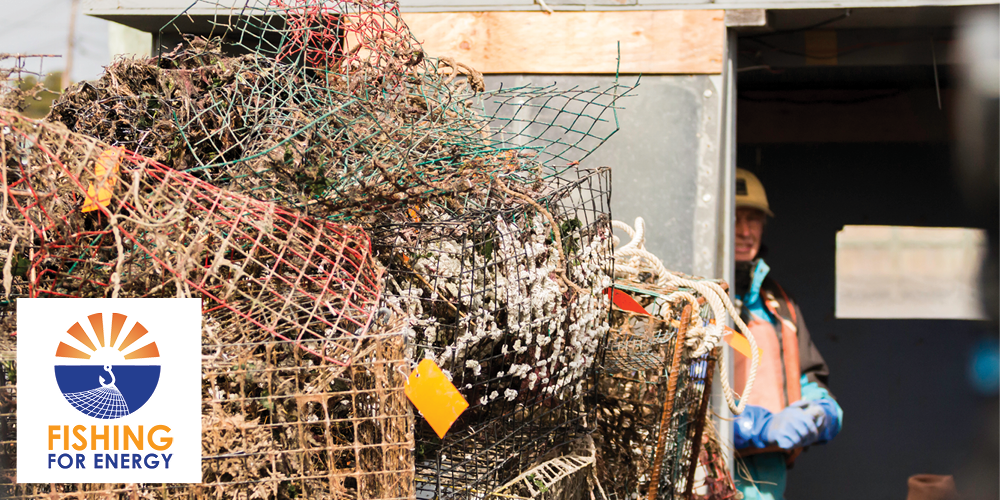 Fishing for Energy, a partnership between Covanta, the National Fish and Wildlife Foundation, the National Oceanic and Atmospheric Association and Schnitzer Steel Industries, provides commercial fishermen with a way to dispose of unusable fishing gear at no charge. The partnership has invested more than $2.5 million to address the issue of derelict fishing gear across the United States, to remove debris in 10 states, and to generate enough electricity to power more than 2,500 homes for one month. Here’s a look at the progress being made in just three states. 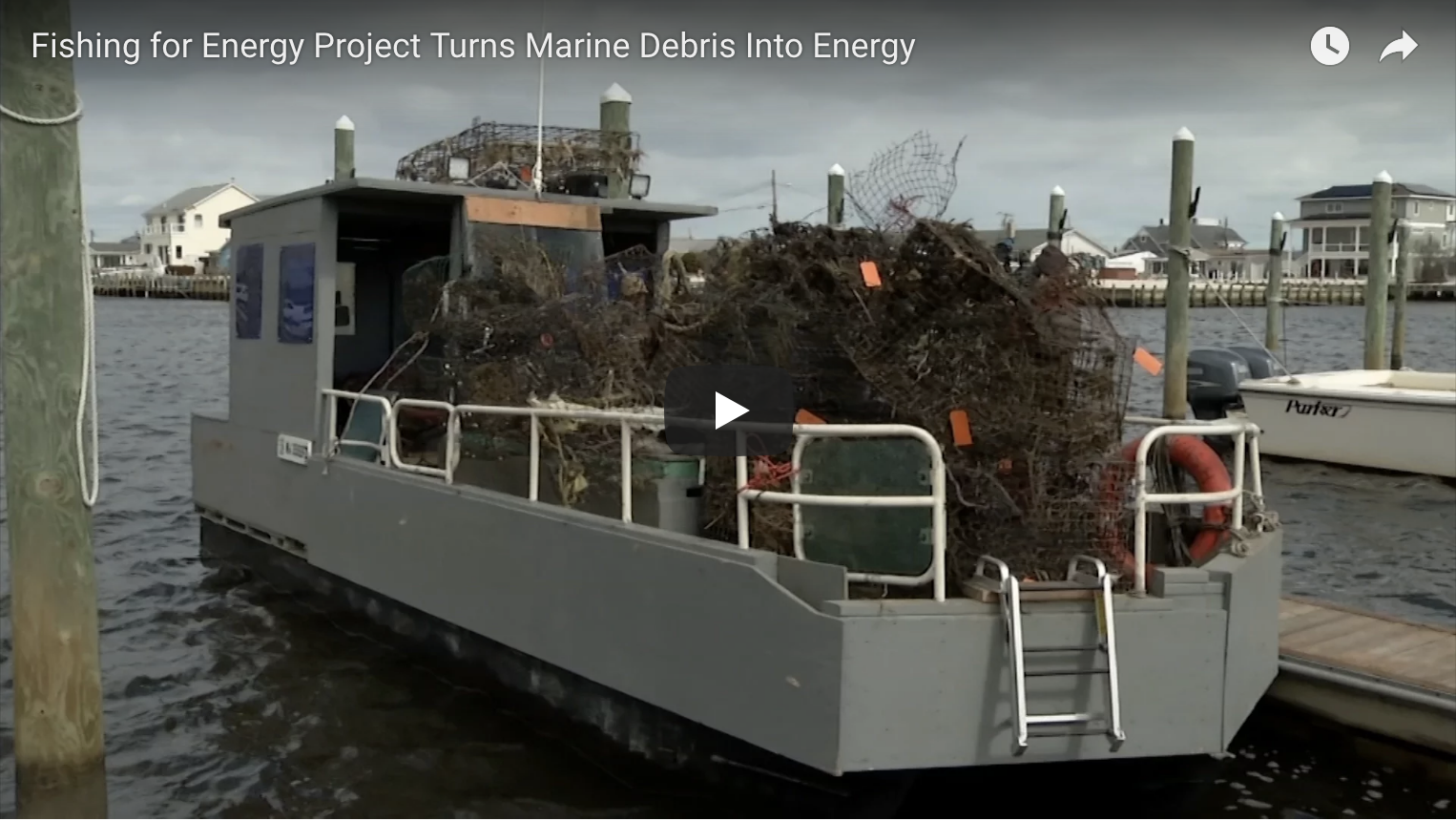 We support the Go Green Initiative (GGI), a nonprofit whose mission is to provide schools and communities with the tools and training they need to create a “culture of conservation.” Many schools are required to recycle, but too often recyclables are mixed in with garbage. We’re proud of our role in introducing the GGI into many schools in the areas in which we operate. 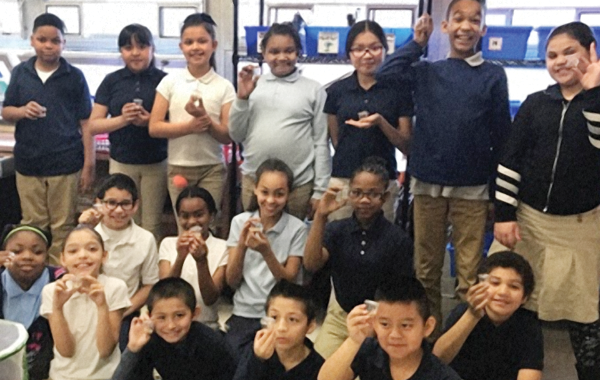 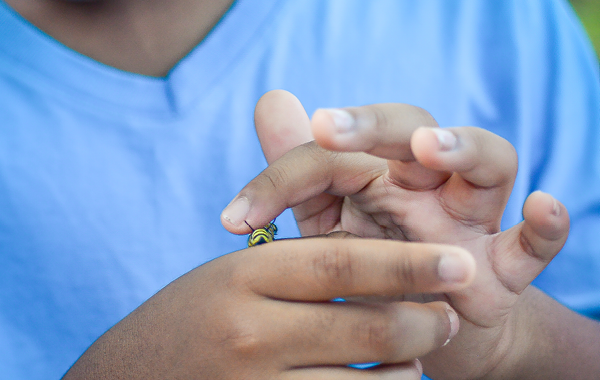 A fourth-grade class at Wiggins College Preparatory Lab Family School in Camden, N.J., holds up the caterpillars they are observing as part of the butterfly garden their teacher purchased with the proceeds from a mini-grant for environmental education.

“Thanks to organizations like the Go Green Initiative, students are able to have hands-on learning experiences while also giving back to the environment. We truly appreciate all you do.”

In 2016, we introduced the program to the following communities:

Camden, New Jersey. In 2015, the Camden City School District’s 22 schools were informed that they would be inspected by the county for compliance with local recycling ordinances, and potentially subject to fines of up to $3,000 per school per day (or $12.1 million in a school year) for noncompliance. In partnership with GGI, Covanta worked with the district’s facilities department to conduct free waste audits at multiple schools and to help get recycling programs started through education and outreach with the staff and students. GGI trained 60 teachers from eleven different schools, representing pre-K through twelfth grade as well as principals, green teams and food service vendors. We also helped teachers apply for $100 mini-grants for classroom supplies to enhance environmental education. Along with two other community partners, our effort pooled $6,000 to give mini-grants to 60 teachers. We are now working with GGI to replicate this successful model in Newark, New Jersey.

In June 2017, the Camden Collaborative Initiative recognized Covanta with an Environmental Hero Award in recognition of Covanta’s work on the recycling program for the local school district. Presented by the City of Camden Mayor, Dana Redd, the award honors efforts that have made a positive impact on the city’s environment.

Newark, New Jersey. We worked with a private school, St. Benedict’s Prep, to focus the student body on the environment and sustainability. We had support from the Dean of Faculty, who initiated sustainability initiatives such as recycling the plastic clamshells used in the lunchroom. Noreen Connolly, a faculty member, formed the Green Bees, a student group training the entire student population on more sustainable behavior. We supported the program by donating funds for receptacles in all classrooms and helped the school improve recycling and systems in general. Read more about the graphic novel on climate change and recycling that a St. Benedict’s Prep student was inspired to create. 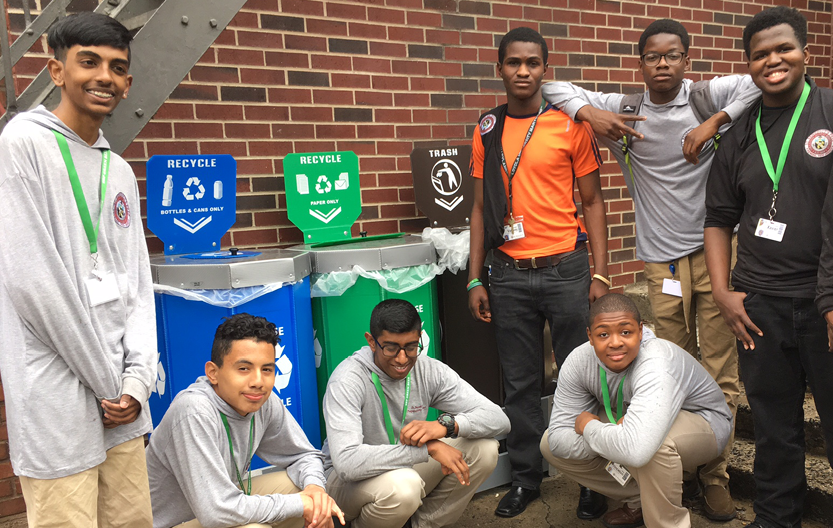 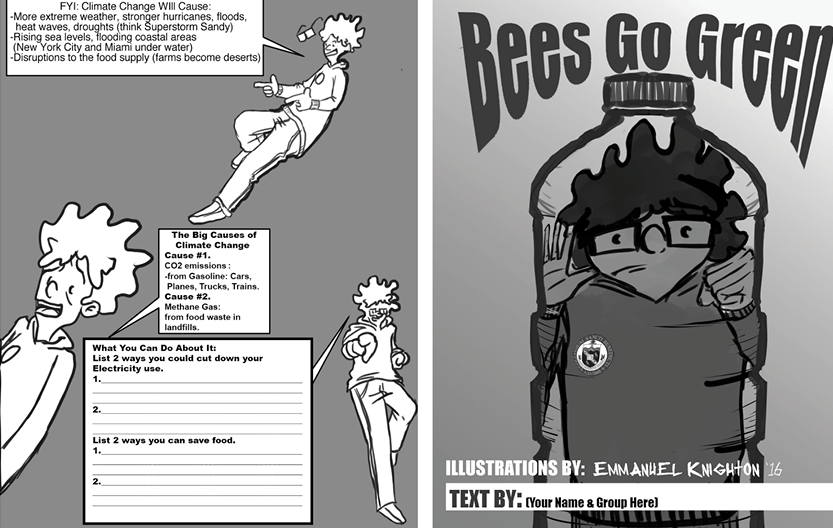 As an outgrowth of our work in Camden and Newark, we launched an e-newsletter, Catching Up with Covanta, to highlight the innovative projects and partnerships we’re involved with in communities across New Jersey. We send the newsletters to community members and local businesses, with an invitation to contact our Community Liaison to learn more about our outreach activities and facilities.

Chester, Pennsylvania. The Chester Upland School District is located in an economically challenged area where grocery store options are often limited to small corner markets with a narrow variety of foods. Working with GGI, we sponsored a program called Nourishing Breakfasts for Chester’s Children, which was supported by Albertson’s Foundation, the Entertainment Industry Foundation and Fair and Square grocery stores. What started as a single breakfast on a Saturday in November 2016 ended up being a full-day event where participants learned how to make healthy meals based on what was available in local convenience stores. The program was so successful, the school district held a second event in May 2017. 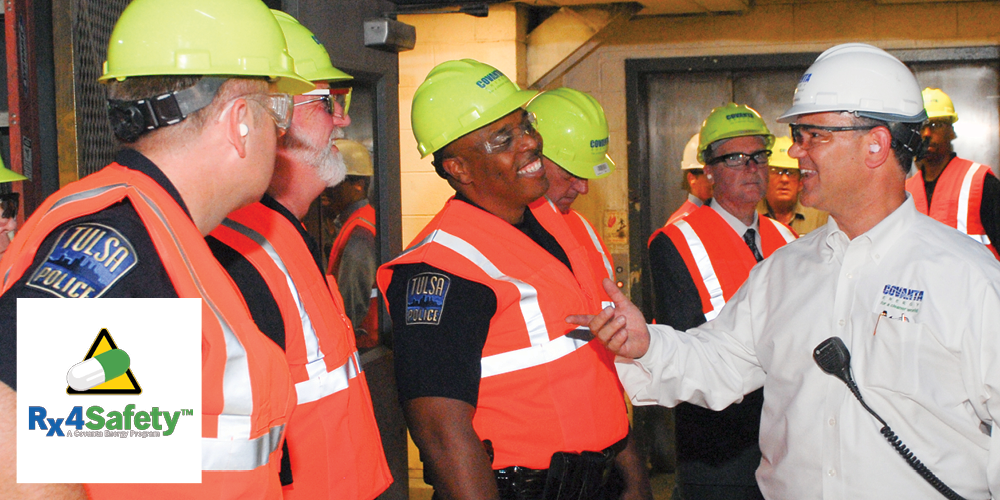 Covanta’s Prescription for Safety Program (Rx4Safety) provides for the safe disposal and destruction of medications collected at community events. Since its launch in 2010, Rx4Safety has safely destroyed more than four million pounds of unwanted medications, with almost one million pounds destroyed in 2016 alone.

We launched this program in response to evidence of prescription drug abuse as well as pollution in our waterways. Rx4Safety disposal is offered free of charge to residential take-back programs conducted in conjunction with local law enforcement. Our EfW facilities enable us to recover energy from the disposal of prescription medications, over-the-counter drugs, veterinary medications and nutritional supplements while assuring destruction of complex organic pollutants, preventing their release into the environment.

Through a broad range of partnerships—including with the Department of Justice, local police forces, state-level administrators and environmental groups—we’ve helped build a powerful coalition to address a serious social and environmental concern. These partnerships have enabled us to make substantial progress in eliminating pharmaceuticals from improper use and disposal in the communities we serve. 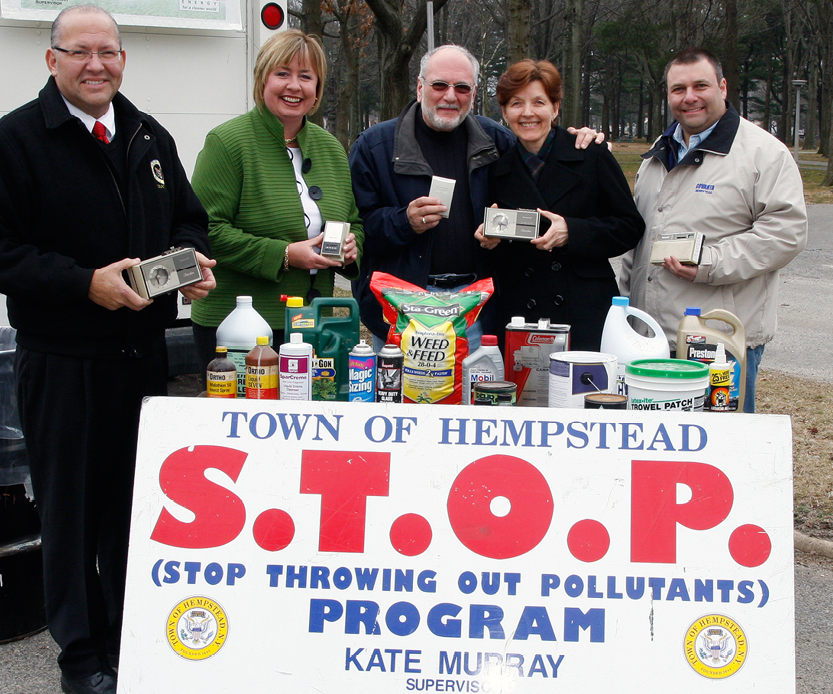 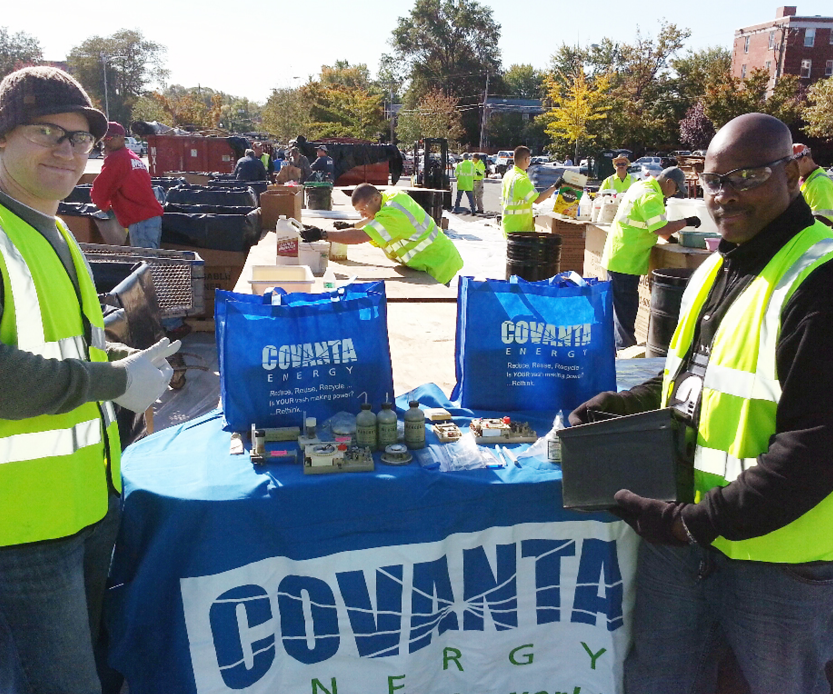 Our EfW facilities use sophisticated air pollution control equipment that removes over 95 percent of mercury. We believe that the best strategy for preventing releases of mercury and other toxins is to reduce its use in consumer products. To help achieve that goal, we are a sustaining partner of the Product Stewardship Institute, a nonprofit focused on minimizing the negative impacts of consumer products and packaging. We also support legislation that would eliminate the use of mercury in consumer products. If mercury must be used, we believe the manufacturer should be responsible for its proper disposal.

As a testament to the efficacy of reduction efforts, we have seen a continued decrease in the amount of mercury that reaches our plants. We hope this trend continues. In the absence of a nationwide initiative to reduce or manage mercury in consumer products, we have conducted mercury awareness and collection programs since 2000. Through these efforts, we have helped divert more than 3,300 pounds of mercury from the waste stream, which is roughly equal to the amount of mercury found in 1.5 million thermostats. 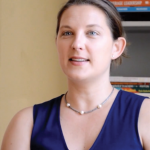 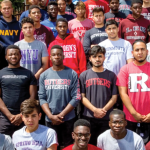